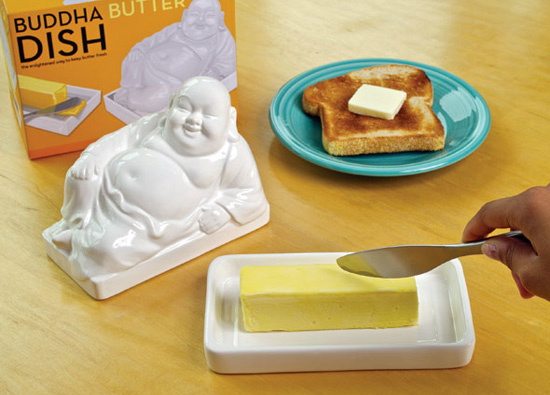 I did a quick Internet search and discovered that there is a product named Buddha Butter. This post isn’t about that.

I also found several pictures of a Buddha butter dish. While cute and kitschy — if slightly sacrilegious — this post isn’t about that, either.

So, what is it about? Patience, dear reader! You’ll soon find out.

As you may remember, I recently started seeing a biofeedback therapist every Friday. The hope is that biofeedback will lessen, or even eliminate, the chronic daily migraines that I’ve suffered from for years.

This week, Sally*, the biofeedback therapist, asked whether I currently had a migraine. I said that I did not, but that my neck and my right shoulder were extremely tense, a condition which usually lead to one. She said that she would start the session off by measuring my muscle tension — and beginning to teach me to reduce it — via an electromyograph, which measures and records muscle tension.

Candy, Sally’s trainee, wired me up to the electromyograph by placing a few conductors on my neck and shoulder. A few moments later, a graph, called an electromyogram, popped up on the computer screen in front of me. It looked something like the image below, except that all of my peaks and valleys were above the horizontal center line.

Sally said, “Wow, you really are tense.” She explained that, ideally, my muscle tension would be at three or below, but that mine was at 15. Then she asked me to practice my deep breathing. The goal was to get the lines to dip below that horizontal center line, which represented three. I watched as the peaks got lower and closer to the center line, but were still far too high.

I said, “Let me try something.” I tried another technique and the waves soon dipped below the center line.

Candy said, “You are the Buddha.”

I said, “I’ll tell you my technique when we’re done.”

After a few minutes, Sally said that we were finished and asked me what I had done to reach the desired state. I was still wired to the electromyograph, but she had taken the graph off the computer screen.

I said, “I imagined that I was a pat of melted butter on a hot English muffin on the Dalai Lama’s breakfast table.”

I asked what had happened.

Sally said, “The moment you mentioned the Dalai Lama, the graph dipped dramatically.”

She put the graph back up on the computer screen. Sure enough, the graph had dipped far below the center line, much lower than before.

I said, “Wow! I wonder what would happen if I said ‘Buddha’?”

The graph dipped again, even more dramatically than when I had said “Dalai Lama.”

Sally, Candy and I looked at each other in awe, each of us saying something along the lines of, “That was so cool.”

For next week’s biofeedback homework, in addition to practicing deep breathing, Sally wants me to use “Buddha butter” as a mantra when I feel my muscles tensing.

I’m not surprised that the lines dipped when I said the Dalai Lama or Buddha’s names. Even though I don’t practice Tibetan Buddhism, I consider the Dalai Lama to be a truly holy man. I aspire to emulate his inherent goodness, his kindness and his compassion. I admire his intelligence, his curiosity, his humor and his down-to-earth nature.

(From time to time, I imagine having famous people over for tea. The Dalai Lama and Stephen King have long been on my invitation list. I suspect that they would enjoy each other’s company immensely.)

And it’s no wonder that my muscle tension decreased when I thought of the Buddha. Buddhism is one of the cornerstones of my personal eclectic spirituality belief system. While some of the stories about him are undoubtedly myth, the Buddha himself was a real person. His philosophies, which his followers so carefully recorded and preserved, provide a blueprint not only for enlightenment, but for “waking up” and living a life of compassion and balance.

I am, however, surprised that the graph dipped so dramatically and immediately when I said the Dalai Lama and Buddha’s names.

If saying someone’s name could produce such dramatic results, it’s easy to imagine that saying negative things could create the opposite effect. One element of Buddhism’s Eight-fold Path is Right Speech. The concept is that when we participate in right speech, suffering — ours and other’s — is lessened. Right Speech entails being truthful and kind, not gossiping and being aware of our motive when we speak. Are we talking to make ourselves look important or intelligent? Or do we have something important to convey, something that needs to be said. One good guideline comes from the 12-step rooms: “Does it need to be said, does it need to be said now, does it need to be said by me?” Another excellent guideline to Right Speech is the following internet meme. 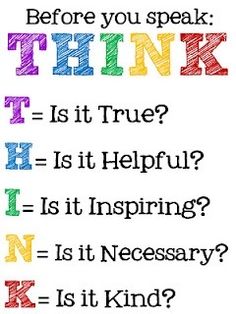 I am incredibly grateful that I have the opportunity to do biofeedback. It provides real-time evidence that meditation works. It is teaching me to recognize when meditation has helped me to reach “the zone” —  in other words, when I’m doing it “right.” It causes me to think about meditation and the mind/body connection in a different light. And evidently, it’s going to teach me some lessons that I didn’t see coming, like “Buddha butter” being my own custom mantra.

*Name has been changed to protect anonymity