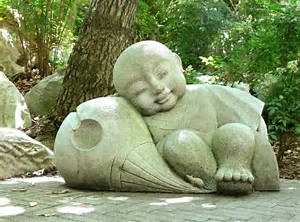 Several years ago, I was searching for an English-speaking Buddhist temple in Chinatown. I stumbled across a website, complete with a picture, about a Caucasian man who was a resident monk at a local temple.

As fate would have it, I ran into the monk, Venerable Benkong, a couple of weeks later at the bus stop near my apartment. Tall and white, attired in a mustard-colored robe, he was unmistakable.

I introduced myself just as the bus pulled up, and we continued our conversation as we headed uptown. He told me that his temple did not conduct any services in English. He was, however, spearheading a Chinese-to-English Buddha Dharma Translation Team in Tainan, Taiwan. I mentioned that I had an editorial background and offered to edit completed translations.

I had the privilege of editing a number of these translations over the years. Although I had read countless Buddhist books and attended a myriad of classes and “sits,” I quickly realized that I had only scratched the surface and had no hope of becoming an expert during this lifetime. These were scholarly works written by monks who had spent their lives learning and living Buddhist “theology.” (I use the word “theology” here as a sort of shorthand, since the Buddha himself told his followers not to waste their time worrying about whether there was a God. Here, “theology” refers to the investigation — and explanation — of Buddhist concepts as they relate to the world.)

In addition to being academic in nature, these writings were inherently Chinese from a religious and cultural perspective. So I felt like I was given a secret window into a world to which most Westerners weren’t privy.

Venerable Benkong and I remained in contact via email even after I was no longer able to edit for his team due to time constraints. I feel honored to count him as a reader of this blog. Recently, I asked whether he would like to write a guest column. He declined, but graciously offered to allow me to share those Chinese-to-English translations that the author, Master Shi Zhiguo, considers to be public domain.

Rather than publishing only the English translation, I’m going to include the Chinese source as well. I’m going to start with bardo, an “in between” or “transitional” state between lives, from a work entitled Auspicious Birth. It’s a concept that I wasn’t very familiar with prior to editing these works, and I hardly consider myself an expert. I only hope to share these scholarly works with my readers.

I hope that you find them as fascinating and enlightening as I do.