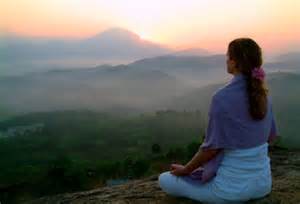 I received my first formal meditation training from the abbottess of a Manhattan Zen center. The directions were deceptively simple: “Count each breath until you get to ten, then start all over again. If thoughts distract you from your count, start back at one.” After receiving these instructions, I closed my eyes and sat Zazen for 20 – 30 minutes. I quickly learned that reaching 10, uninterrupted by thoughts, was impossible. If random thoughts didn’t rise, then self-judgement did: “Wow! I reached six without having random thoughts! I may be getting the hang of this!” Of course, the moment that self-judgement crossed my mind, I had to start back over at one.

The abbottess invited questions and I raised my hand. “At the risk of sounding too goal oriented, how long does it take to get good at meditation?” Everyone, including the abbotess, laughed; I’m sure that it was because they could identify.

Fast forward to last Friday. I was at my biofeedback session. The therapist attached a clip to my earlobe and asked me to practice my deep breathing. She explained that the system would respond with one of three distinct tones, only one of which, a neutral, mid-range bell, was desirable. It would sound every few seconds while I was “in the zone.”

I closed my eyes and focused on taking deep breaths and releasing them slowly. (This varies from my mindfulness meditation practice, in which I observe my natural breathing without trying to control it. But it is simply another form of meditation.) After ten minutes that felt like five, the therapist asked me to open my eyes. She printed two reports. One illustrated the difference in my brainwaves as I entered and exited “the zone.”  The other was a simple bar graph that showed how long my brainwaves had been in each state. Being the Type A, goal-oriented person that I am, I latched onto the big green bar which said that I had been “in the zone” 70% of the time.

In my head, I did the Dance of Joy. Oh, yeah! All those years of meditating paid off! Whoohoo! I’m a meditation rock star!

While it was nice to see tangible proof that deep breathing and, by extension, meditation, work, a bar graph illustrating my skillfulness is contrary to the very purpose of meditation. In fact, as I write this I am picturing Buddha laughing at a bar graph after his latest meditation session. The green “in the zone” bar reads “100%.” Of course it does; as the Buddha, he has reached enlightenment. And, as an enlightened being, he finds the irony of measuring one’s “success” at meditation to be worthy of a deep belly laugh.

So, what is the purpose of meditation? The Buddha said that it was to “wake up.” So many of us go through life worrying about the past, thinking about what we could have said or done better or differently. The rest of the time, we daydream about and plan for the future: what it’s going to be like “when.” When I get a house. When I get married. When I have children. When I get a car. When I get a more expensive car. The “whens” never stop. This is what the Buddha was referring to in the second Nobel Truth, which says that the cause of human discontent is craving: craving more stuff and relationships; craving better or different stuff and relationships; craving to escape physical, emotional and spiritual pain.

Meditation helps us to wake up by teaching us to remain in the moment as we observe “what is” — our breath, external sounds, a mantra… Over time, we start to notice that we are  increasingly “in the moment” when we’re not sitting on our meditation cushion or chair. We’re really present when we’re doing our jobs, walking down the street, spending time with our loved ones.

There are other benefits to meditation, such as being less reactive and more compassionate, not to mention measurable health benefits. But “waking up” is, in and of itself, priceless.

The other irony is that the moment that focusing on my 70% success rate made me prideful, which is the opposite of being humble. Humility is a prized characteristic in Buddhism. Dictionary.com defines humility as a noun:

the quality or condition of being humble; modest opinion or estimate of one’s own importance, rank, etc.

I have come to believe that humility isn’t about having a modest opinion of oneself. Rather, it is of having an accurate assessment of oneself in relationship to others. It is being aware of who you really are, your assets and character flaws, in that moment, and not elevating or denigrating yourself in relationship to others. In other words, my assets don’t make me better than anyone else. And my defects don’t make me lesser than anyone. To quote, Popeye the Sailor, “I am who I am” at this moment. The law of impermanence tells me that I may be someone else, with a different balance of assets and defects, in the next moment.

In the end, I recognize the bar graph for what it is: a tool. It showed me that meditation makes demonstrable, and immediate, changes to the brain: a snapshot of my brain at that moment. And it taught me an invaluable lesson about humility.