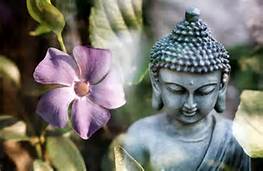 My dear friend Michele Scott James is a professor of history and philosophy and religion at MiraCosta Community College. She has a BA and an MA in Asian studies from the University of California, Santa Barbara with an emphasis in religion and history. She also has equivalency in religious studies and history.

A few weeks ago, Professor Michele Scott James suggested that the readers of my Eclectic Spirituality blog would like to read some of the papers that her Eastern Religions students wrote for a recent assignment.

Upon reviewing the selection that she sent, I wholeheartedly agreed. The assignment was to write a 750 – 1,000 word microtheme* on the following:

If you were trying to convince a friend to become either Buddhist or Hindu, what arguments would you use and why?

I have offered this option for about 20 years, and it is the most popular choice. In past years, about 3/4 of students have argued for Buddhism. In the last few years, I have noticed a gradual increase in the numbers that have argued for Hinduism—this year that number increased to about 50%. I have my own theories as to why Hinduism has become such a popular choice.

I have chosen a selection of papers that I thought would be interesting to a lay audience—in other words, people who are not academics. I received some fine papers that I did not include for that reason.

Today I am pleased to present the first paper in this guest series, which I am entitling “Convert a Friend.” I plan to reprint them with permission “as is,” without edits or commentary. I offer Professor Michele Scott James and her students my heartfelt thanks for generously allowing me to share them with you. I hope that you enjoy them as much as I did!

* A short essay focusing around one thesis or two closely related theses. These used to be known as “compositions.”

The following essay was written by Aren Denman.

Buddhism is a rebel religion founded to give the poor hope, and the weak peace.
Established in India during the 5th century, Buddhism is the practice of mindfulness, meditation, and moral code in order to reach enlightenment. Buddhism is an interesting religion that I think everyone should try in order to become more mindful and at peace with his or her own suffering, whatever that may be. Everyone has fear and love, the question is which emotion do you feed more? Buddhism teaches meditation, the art of calming the mind and refocusing on the body. This practice is believed to be the foundation for your happiness. This is why you should practice Buddhism, to find happiness, peace, and acceptance of your mortality.

Enlightenment is the idea of not being reborn-again, or reincarnated; simply put, it is finding peace in your short lifetime by accepting your mortality and eventual death. This is why you should become Buddhist, to find the answer to your suffering, because once you accept your inevitable fate, you will be at peace within yourself. Brahmanism, the popular Indian religion at the time only allowed higher wealth classes to achieve enlightenment, while Buddhism gave the middle and lower class hope, claiming anyone can reach enlightenment. This idea presented a unity in social classes, rather than an inequality, and was quickly adopted by other cultures. Dating back many years ago, Buddhism has kept its roots in many western and eastern cultures. The religion has survived through centuries of war and corruption by preaching an idea of the middle way. Rather than live life of extremes, which promote an unhealthy lifestyle, Buddha encourages a life of simplicity in order to find true happiness.

Buddha explains the consequences of a life of luxury, which leads to disillusionment. This negative outcome is still true today. There are millions of wealthy people, especially in America, who aren’t happy. Why is this? Buddha explains it’s because they have become attached to their material items, developing a fear of loss and craving for more. Buddha is not against wealth, in fact, he praises it. Buddha explains wealthy people are in the privileged position to practice giving, the art of letting go. This charitable act is not possible without the possession of wealth; therefore wealth is not the problem, the problem lies in how you use your wealth.

Along with wealth potentially being a problem, Buddha explains how a life of depravation will lead to illness. Buddha practiced starvation, self-flagellation (hitting himself) and nakedness in order to become more in control of his mind and body. However, Buddha found the opposite, although his psychic powers increased (his mind), his physical body weakened, close to the point of death. This still reigns true today, you can spend your whole life trying to help other people but if you don’t help yourself first and foremost, you will do no good. Your body is your guide to your soul, keeping you level headed, grounded and in peace with nature, and when it is out of sync with your mind, you will not truly be able to be at peace.

Letting go of materialistic lifestyle helps ease the mind from distractions, giving you more personal freedom to truly learn what makes you happy. To further your course towards enlightenment, the religion of Buddhism practices meditation and yoga. Meditation is going inward. Not to be confused with escapism, meditation is confronting your body and mind, connecting them to become more aware of your consciousness. The practice of meditation brings a foundation of grounding to your life, focusing yourself to recognize emotions and rather than act on them, accept them instead. A person who meditates will find bliss in the little things in life, like the clouds in the sky or the grass blowing in the wind. A person who meditates will find power in his mind. They will be able to find peace in his or her emotions and let stress float away like a piece of driftwood in the ocean.

Meditation is thought to only be practiced while your sitting down, but you can meditate while you walk, workout, or even have sex. Meditation calms your mind and allows you to recognize emotions and problems; it forces you to become aware of your physical self; all of the aches and pains in your body. It allows you to become more mindful and aware of what is causing you stress. This act is the first step to solving personal problems.

Becoming more widely known in western culture, Buddhism will bring you closer to happiness and joy in your life. It is a unique religion that I think everyone should research and try at least once. The moral codes and ethics behind the religion may seem a little strict for some, so I encourage you to look at Buddhism as a personal religion directed towards finding peace within your own consciousness. Buddha does not expect you to be perfect, but instead wants you be at peace with your imperfections. I encourage you to meditate and become more aware of your mind and body. I encourage you to breathe deep and practice joy within yourself. I encourage you to practice Buddhism.

2 thoughts on “Introducing “Convert a Friend”!”