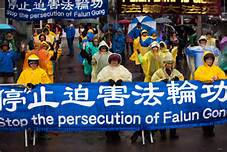 Yesterday, one of coworkers, T., who is twenty-something and was raised in China, asked me if I had “seen the parade” on the way to work. I said that I had not and asked what the parade was for.

Since I live on the edge of Chinatown and have read Falun Gong pamphlets about the systematic eradication of practitioners by the Chinese government, I told her that it wasn’t a parade, it was a protest. (Our office is a couple of blocks from the United Nations.)

“They say it’s good, but the government says it’s bad.”

I explained that the Chinese government was probably afraid of the movement gaining too much power. (China has a long history of religious movements morphing into rebellions. Thus far, followers of Falun Dafa have been nothing but peaceful, but the movement’s rapid growth must seem threatening to the government.) I then told her that, from my limited knowledge, Falun Dafa was a peaceful spiritual practice akin to qi gong and, thus, nothing to be feared.

I asked T. if her family was religious and learned that several aunts were Christian and that they had never been persecuted for their beliefs.

Then T. asked me whether I was religious. I told her that I had been raised Christian, but that I was probably more Buddhist than anything else at this point. Then I gave her a nutshell explanation of Eclectic Spirituality. She understood the concept immediately and figured out that was one of the reasons that our manager S. and I are so close. (S. and I have been friends for many years and bonded through our love of spirituality.)

After a thoughtful pause T. asked the hard question: “What does it do for you?”

I reflected for a moment, but not because I couldn’t answer. I have, after all, written an entire book on Eclectic Spirituality and post regularly on the topic here. Rather, since we were supposed to be working, not discussing life’s great mysteries, I needed my answer to be succinct. Finally I said that I had “talked to God” regularly when I was a small child even though my family wasn’t particularly religious. I said that I suspected that people like me were hardwired to be religious/spiritual and that we would always find a way to fill that need.

I explained that meditation was the cornerstone of my spiritual practice and that meditating makes me a nicer person, one who is more likely to empathize with and have compassion for other people. T. laughed. I told her that science had proven that to be the case.

One such study, funded by the Mind and Life Institute,

…invited participants to complete eight-week trainings in two types of meditation. After the sessions, they were put to the test.

Sitting in a staged waiting room with three chairs were two actors. With one empty chair left, the participant sat down and waited to be called. Another actor using crutches and appearing to be in great physical pain, would then enter the room. As she did, the actors in the chair would ignore her by fiddling with their phones or opening a book.

The question DeSteno and Paul Condon — a graduate student in DeSteno’s lab who led the study — and their team wanted to answer was whether the subjects who took part in the meditation classes would be more likely to come to the aid of the person in pain, even in the face of everyone else ignoring her. “We know meditation improves a person’s own physical and psychological wellbeing,” said Condon. “We wanted to know whether it actually increases compassionate behavior.”

Among the non-meditating participants, only about 15 percent of people acted to help. But among the participants who were in the meditation sessions “we were able to boost that up to 50 percent,” said DeSteno. This result was true for both meditation groups thereby showing the effect to be consistent across different forms of meditation. “The truly surprising aspect of this finding is that meditation made people willing to act virtuous — to help another who was suffering — even in the face of a norm not to do so,” DeSteno said, “The fact that the other actors were ignoring the pain creates a ‘bystander-effect’ that normally tends to reduce helping. People often wonder ‘Why should I help someone if no one else is?'”

These results appear to prove what the Buddhist theologians have long believed — that meditation is supposed to lead you to experience more compassion and love for all sentient beings. But even for non-Buddhists, the findings offer scientific proof for meditation techniques to alter the calculus of the moral mind.

I also said that I believed that religion and spirituality help to provide a moral framework for people. I stressed that there are plenty of good, moral non-religious/spiritual people, but that there is merit in having institutions and belief systems that helps instill these values, especially in children.

That was the end of our discussion. In retrospect, I think that I managed to hit the key points of why religion and spirituality are important to me.

If you were asked, “What does it do for you?” what would your answer be?